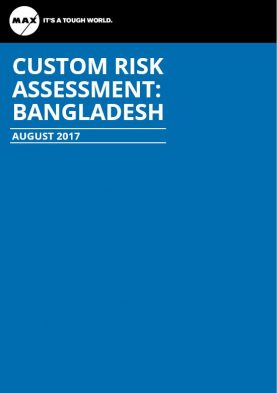 Following the high-profile attack on foreign business people in Gulshan, Dhaka on July 2016, aggressive crackdowns against militancy in the country have occurred in waves in the city. Although there has not been an attack in the capital since July 2016, a number of raids in and around Dhaka have successfully foiled a number of plots targeting the city. There also remains a potential for lone-wolf attacks, which the Islamic State continues to call for in media outreach to the country.

Meanwhile, both the Awami League and Bangladesh Nationalist Party have begun reorganizing and recruiting ahead of anticipated elections within the next two years. Significant clashes marked the previous election in 2014, and while there are no indications of a similar result, tensions between the two parties are still palpable. The rise of political Islam in Dhaka has also become an issue following religious protests and counter-protests over the placement of a controversial statue near the Supreme Court. The Awami League appeared ready to seize on this phenomenon by announcing a new political alliance with moderate Islamist parties in an attempt to erode the base of their rivals. Environmental protests in the capital have also taken on an anti-Indian sentiment due to Delhi’s funding of an unpopular project in Dhaka.

Religious tensions in the periphery led to a spate of vandalism and other attacks against the Hindu population in late 2016 and again in June 2017. A string of murders of Hindu individuals taking place during the summer of 2016 reached its climax prior to the Gulshan attack, yet has reportedly not continued since. However, as previously mentioned, the risk of such lone-wolf style attacks resurging cannot be ruled out.