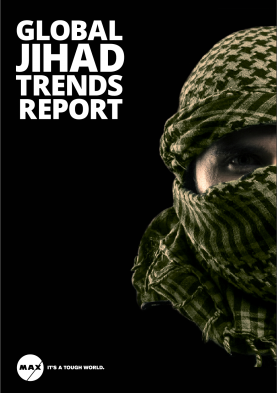 The report explores the jihadi world, and includes in-depth analysis of communication, propaganda, videos, claim of responsibilities, trends and all other things related to global jihad organizations.

In Asia, Afghanistan and Pakistan witnessed an escalation of attacks by the Taliban and the Tehreek-e-Taliban Pakistan (TTP) respectively. The attacks indicated notable developments to both groups’ capabilities, as the target in the region remains state security forces. Meanwhile, in India, a series of IS-linked arrests and a notable message from the group’s Indian operative highlighted the existing potential for increased radicalization in the current political environment. Finally, despite notable losses in Marawi City, Islamic State (IS) continued to project its successes in recent months in the southern Philippines, likely in order to continue consolidating regional militants under its banner.

In the Middle East and North Africa, thwarted IS attacks in Turkey and rocket fire by Wilayat Sinai in southern Israel demonstrates the jihadist group’s interest in targeting both countries. In addition, IS’s affiliate Jaish Khalid bin al-Waleed’s publications of its activity in southern Syria are likely aimed at attracting fighters fleeing from the eastern parts of the country, amidst the organization’s continued setbacks in this region. In Yemen, recent large-scale attacks by the Sunni jihadist militant group in Aden demonstrate IS’s growing focus on the southern Yemen. Additionally, in Egypt, the emergence of an al-Qaeda-linked group Jamaat Ansar al-Islam is likely an attempt to present itself as an attractive alternative for IS fighters fleeing Syria and Iraq. Lastly, the stabbing assault in Tunisia underlines the persistent threat of militancy in the country stemming from radicalized Islamist individuals.

In Africa, Somalia witnessed the largest ever vehicle-borne IED (VBIED) attack on October 14 in Mogadishu, which caused over 700 casualties and remains unclaimed. This is an indication that the attack deviated from the original plan, and that al-Shabaab, the likely culprits of the attack, are attempting to distance themselves from it in order to not alienate the local population and lose their support. The Lake Chad area witnessed the second Islamic State’s West Africa Province (ISWAP) activity publicized in less than a month, after IS-linked media reported on an attack conducted in Yobe State on October 25, constituting an attempt to bolster ISWAP’s notoriety within the regional jihadist landscape. In West Africa, Jamaat Nusra al-Islam waal-Muslimeen’s (JNIM) conducted an attack targeting a security base of forces guarding a French road construction firm while highlighting the origin of the company, aligning with global jihadist notions of expelling western “crusaders”, as well as regional jihadist efforts to deter French Barkhane forces.

In the US, IS reported on the October 31 attack in New York in its weekly newsletter al-Naba, indicating that the attack was conducted by the group, which is corroborated with the characteristics of the attack itself. Despite the group’s limited scale of influence to plan and organize coordinated attacks in the US, as it has in Europe, it is likely that IS will continue to employ its propaganda to inspire similar low-profile but symbolic and politically high-impact attacks in prominent urban centers across the US, especially in the form of “lone wolf” assaults, in order to capitalize on the public attention it garners.